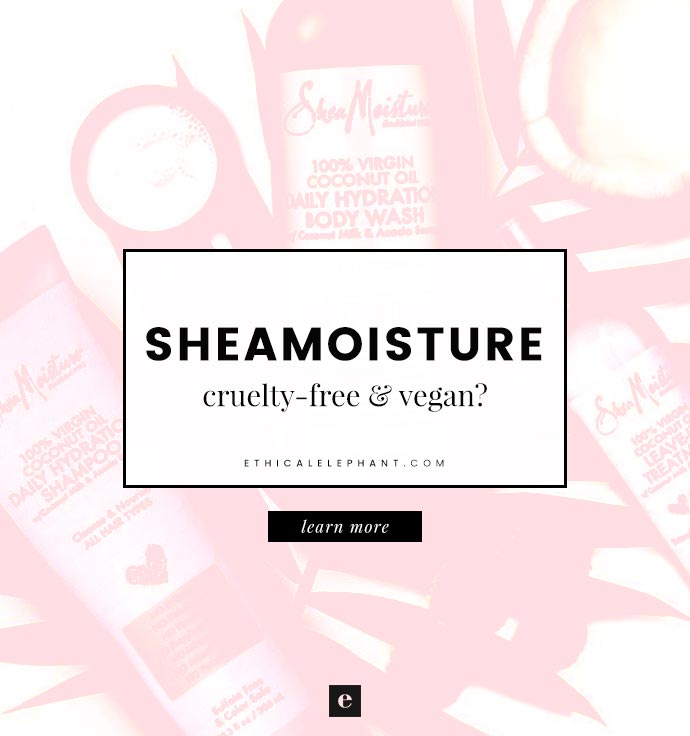 Inconclusive. It is not clear whether SheaMoisture is cruelty-free or not.

Buy or boycott SheaMoisture at your own discretion.

There is virtually no information on SheaMoisture’s website about their stance on animal testing except for a very underwhelming statement “Tested on our family for four generations. Never on animals.”

SheaMoisture also proudly displays the PETA cruelty-free bunny logo on their product packaging and website but since PETA isn’t the most trustworthy source, I tried digging a little deeper to get to the bottom of understanding SheaMoisture’s animal testing policy.

So I emailed them and they responded saying:

“Thank you for contacting SheaMoisture. Sundial Brands LLC is a privately owned, animal cruelty-free company. We do not test on animals, we are not affiliated with any companies which test on animals, and we do not sell in parts of the world that require animal testing. In fact, in most parts of the world there is a trend towards the banning of animal testing, so savvy ingredient suppliers have provided cruelty-free ingredients for many years now. It is a simple matter for us to require our suppliers to certify they do not test on animals. While there are ways for companies to obtain our products to do what they want with them, those users are not affiliated with us and we cannot control what they do with the products.”

WHAT? If that caught you off guard and you’re still confused about whether SheaMoisture is cruelty-free or not.. you aren’t alone. I was very confused by their response so I wrote back:

“Just one part I’m not understanding, when you said “While there are ways for companies to obtain our products to do what they want with them, those users are not affiliated with us and we cannot control what they do with the products.”

Could you please clarify on that some more? In what type of situations or cases would companies want to test your products? Is it to test the safety of your products? or are your products being tested on animals by a third party as required by law?

SheaMoisture replied back with:

“Once a product has been purchased by a user, we cannot see what they are doing with that product. It can be a typical customer or a company or whomever. We cannot answer your question “In what type of situations or cases would companies want to test your products?” as we do not have any association with companies or people that test on animals.”

I understand and agree companies have no control over what customers do with their products after they’ve purchased them, but I don’t think SheaMoisture should even be considering or feel responsible for those type of cases, and bringing it up in their animal testing policy seems strange to me.

What I don’t get is that they mention there’s a possibility that other companies are using and testing their products on animals without their knowledge.

That seems very shady to me and doesn’t give me the confidence to believe that SheaMoisture is doing everything they can to ensure none of their products or ingredients are tested on animals, even when they aren’t doing the testing themselves.

Therefore, I sadly cannot conclude whether SheaMoisture is cruelty-free or not.

I am posting my correspondence with SheaMoisture publicly so that all of you can make up your own conclusion and decide for yourself if you want to buy or boycott SheaMoisture!

It should also be noted that SheaMoisture’s parent company, Sundial Brands was acquired by Unilever, a corporation that continues to test on animals till this day.

If you would like to support and buy from SheaMoisture but want to know which of their products are vegan… this is what they had to say: